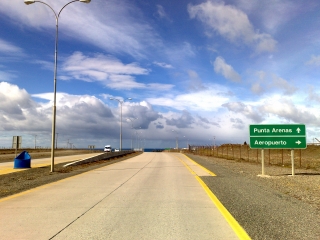 Villa Tehuelches – Kon Aiken
After a night in the very good Flor del Potrero Lodging (Room including breakfast for 8’000), I moved on. Of course again with some wind which was coming mostly from the side today. After around 35km, I met Laura and Ben from the UK, which are on the way to Lima and fighting with some strong head wind since a while. However, because it was cold and windy, we had both to move on fast. Have a safe trip!
Just before they left, Ben told me, that I soon should have tail wind. Unfortunately, that didn’t really happen. It kept to be strong sidewind and therefore I decided to camp just 30km before Punta Arenas at the police station of Kon Aiken. It just got too dangerous with the wind pushing me into heavely used street.

Kon Aiken – Punta Arenas
After a pretty cold night with around 5C in the tent and some rain, the sun came out again in the morning and I moved on. At the beginning even with some tail wind which changed later to side wind again. However, it was much weaker than the day before and I therefore already reached Punta Arenas around lunch time on Saturday.

I will stay a few days in Punta Arenas – go hiking and visit pinguins – and probably move on to Porvenir on Tierra del Fuego on Tuesday.

All the best from Punta Arenas,
Stefan

This site uses Akismet to reduce spam. Learn how your comment data is processed.